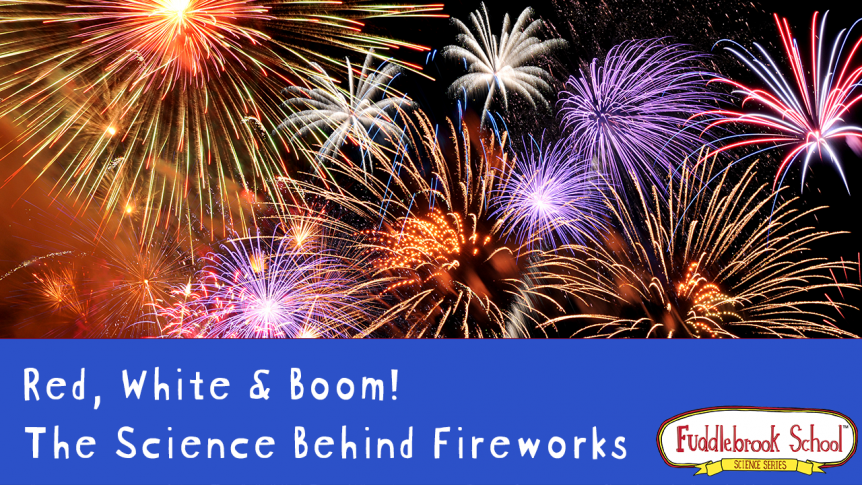 Perhaps this year you’ll get to once again enjoy July 4th celebrations. As you enjoy the show, think how much science is behind that spectacle. People everywhere enjoy the fantastic explosions and the brilliant light displays of fireworks, but there’s a lot happening to make that celebration entertaining. Each firework launched into the sky is a precisely formed assembly of chemicals and fuel, carefully calibrated to produce a particular effect.

Understanding how the contents of a firework produce the impressive variety of colors, forms, and sound intensities requires an understanding of chemical reactions and energy.

Fireworks generate three very noticeable forms of energy: a tremendous release of sound, bright light, and heat. The tremendous booms heard at ground level are the result of the rapid release of energy into the air, causing the air to expand faster than the speed of sound. This produces a shock wave, a sonic boom. The colors are produced by heating metal salts, such as calcium chloride or sodium nitrate, that emit characteristic colors.

Love the pageantry but not the noise? In parts of Europe, quiet fireworks displays have grown increasingly common. The hope is that softer celebrations mean less stress for noise-sensitive children, veterans, older people, pets and wildlife. The noise of fireworks can cause birds to panic and flee en masse. In 2011, 5,000 red-winged blackbirds fell out of the sky in Beebe, Ark., after fireworks celebrations on New Year’s Eve, possibly because the loud noises led them to fly into chimneys, houses and trees.

Loud fireworks also scare larger mammals like deer and coyotes out into roads, where they can get hit by cars, said Lisa Horn, the executive director of West Sound Wildlife Shelter in Washington State. Ms. Horn’s shelter sees an influx of animals after July 4 each year. July 5 is “always all hands on deck,” she said. Pet shelters also claim to take in the most runaway dogs each year on July 5.

For people, loud fireworks can lead to hearing loss. The World Health Organization lists 120 decibels as the pain threshold for sound, including sharp sounds such as thunderclaps. Fireworks are generally louder than that.

Proponents of fireworks argue that removing the percussive sounds of a fireworks show takes away some of the magic. “Silent fireworks would be kind of like watching fireworks on a computer screen,” said Julie Heckman, the executive director of the American Pyrotechnics Association. “It wouldn’t be the real experience.”

For now, it is safe to say your fireworks shows this July 4 will not be without noise. Quiet fireworks have yet to make their way to the United States.

For more fun “real life” science read all the Fuddlebrook stories. But this month in particular try Freddie’s States of Matter “Explosion” from the story The Disappearing Snowman. Or for another take, read The Plant Warrior where we learn other ways we can protect our plants and animals.