In the Fuddlebrook book, The Mystery Scientist, Liza, Freddie, and Bert, along with Herman Tweed, try to imagine what kind of scientist Mrs. Wigglebum’s husband is. Needless to say, their imaginations run a little wild as they picture him as a “mad” scientist first and then in other exotic science-based careers. You’ll have to read the story to discover which type of scientist he turns out to be.

Unfortunately, virologists, immunologists, and vaccinologists have become, due to Covid, part of our science vocabulary. The truth is, we encounter scientists every day in lots of ways! There are some notable scientists and some science-related professions that are not so typical, too. Take our fun video quiz to see how many renown scientists you can identify. Then read on to learn more about cool careers in science you maybe haven’t thought about.

Walk by the supermarket's fresh fish counter and you will see a collection of marine life from around the world. Some of the fish is wild, caught by fishermen from the open seas, but these days, a lot of fish and shellfish is farm raised. Aquacultural managers direct operations on farms and fish hatcheries that cultivate ocean and freshwater fish for human consumption, recreation, and research.

There will always be both man-made and natural disasters, like hurricanes, earthquakes, and terrorist attacks, that affect public health and safety. Emergency management specialists are the officials who plan for these disasters—imagining and preparing for the worst—and then coordinating the emergency responses.

There is a fraction of the world's population that doesn't have enough to eat or doesn't have access to food that is nutritionally rich. Food scientists work to find new sources of food that have the right nutrition levels and that are safe for human consumption.

Think of all the things that use electricity. Power plant distributors work to keep electricity flowing to homes and businesses by carefully watching and planning for problems like big storms that could damage transmission lines, heat waves that cause a big surge in demand for power, or normal construction work, which could take transmission lines out of service.

Any time you hear music at a concert, a live speech, the police sirens in a TV show, or the evening news, you're hearing the work of a sound engineering technician. They operate machines and equipment to record, synchronize, mix, or reproduce music, voices, or sound effects in recording studios, sporting arenas, theater productions, or movie and video productions.

Not unusual enough for you? How about these jobs?

It’s someone's job to create fireworks — namely, a chemist who designs fireworks with chemicals that emit those beautiful colors when they're heated. For example, copper compounds burn blue, strontium compounds let off a crimson hue, and sodium blazes a bright yellow. The chemicals are very reactive, and sometimes dangerous. Being a firework designer usually requires a master's degree or Ph.D. in chemistry.

Space psychologists study how astronauts cope with the conditions of spaceflight and the weightless environment in space. Space psychologists make recommendations about the best way for astronauts to perform physical and mental work, as well as rest. This profession could become increasingly important as more extended periods of space travel arise, such as manned missions to Mars.

Beer, wine, bread, cheese, pickles, yogurt — all of these foods are made by fermentation, the process by which yeast or bacteria convert sugars to acids, gases or alcohol. Zymologists, study how these microorganisms can be used in fermentation processes, such as beer brewing. Louis Pasteur was the first zymologist, discovering that yeast led to fermentation.

A volcanologist is a geology specialist who studies volcanic activity. Volcanologists help to predict the timing and severity of volcanic eruptions.Their work helps to plan evacuations of volcanic areas, making it a useful, although highly specialized, discipline.

These are but a few of the really unique jobs in science. Just like the Fuddlebrook students, we hope you are fascinated by the variety offered. Read The Mystery Scientist, remember to take our famous scientist quiz, and don’t forget this month’s experiment! 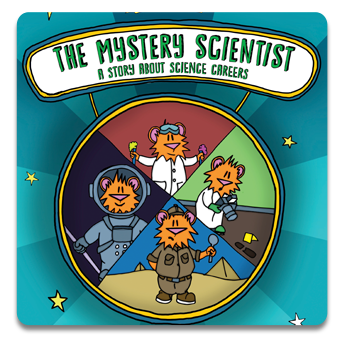