Wow…we've just celebrated Herman Tweed's fourth birthday!  On April 23, 2016, we “officially” introduced Herman Tweed and the whole Fuddlebrook gang to the world. We kicked off with Who Stole Herman Tweed and still recommend this story as a great way to start the series.

But why begin with Who Stole Herman Tweed? In this story, Herman goes missing, and the students in Mrs. Wigglebum’s class have to solve the mystery using the science process skills. These include:

Observation: Science begins with observation. We observe using all five of our senses to gather information about an object or phenomenon. It can be a qualitative (Herman is fuzzy) or quantitative (Herman weighs two pounds). The more descriptive our observations are, the better we can communicate them.

Communication: We take our observations and ideas and talk, write, draw, make models, etc, to represent that idea to others.

Classification: We classify our observations into different categories, which helps us to not forget new information! We mostly categorize by similarities, differences, and how they relate to each other.

Prediction:  What do we think happened? What might happen in the future? Predicting is all about what we think might be happening based on our observations above.

Inference: To infer, we connect all the dots above to make an explanation of our observations. This isn’t just a guess, and can be made from multiple observations!

Conclusion: We take everything above to form a logical outcome. What’s the conclusion of Who Stole Herman Tweed?  Well you’ll have to read to find out or we offer a special treat this month with Fuddlebrook co-author Terri Johnson reading the story for you!

Then be a detective with Herman and try our fun activity Fuddlebrook Mystery Powder. 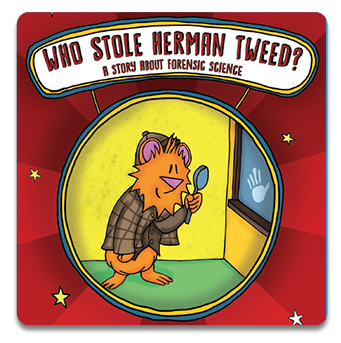