With all the concern with the Omicron coronavirus, the common cold has taken a backseat. And yet, as you read this, about five percent of us have a cold. Up to a billion colds a year occur in the U.S. alone, causing about 60 million lost days of school and 50 million lost days of work—adding up to $25 billion in lost productivity. To make up for it, Americans spend around $5 billion on over-the-counter remedies. Here are some cold stats:

You’ve also probably believed some of these myths about the common cold. They aren’t true so let’s put them to bed!

There is, however, one cold myth that contains a grain of truth: Eat chicken soup. A recent study concluded that chicken soup helps the body clear mucus from the bronchial tubes faster and more effectively than other liquids. It does so because inhaling its warm vapors raises the temperature of the nose and loosens thickened secretions. According to the researchers, the active ingredients in traditional recipes also includes celery, onions, carrots, parsley, mushrooms, parsnips, sage, thyme, salt, and pepper. These are known for their medicinal and antioxidant properties.

Want to know more? Read our Fuddlebrook story, Snot, Sniffles, and Sneezes. Than watch our short video which conveys how quickly germs can spread and why handwashing is so important! 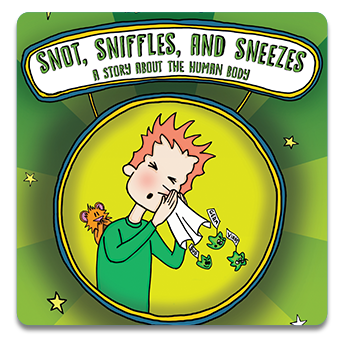