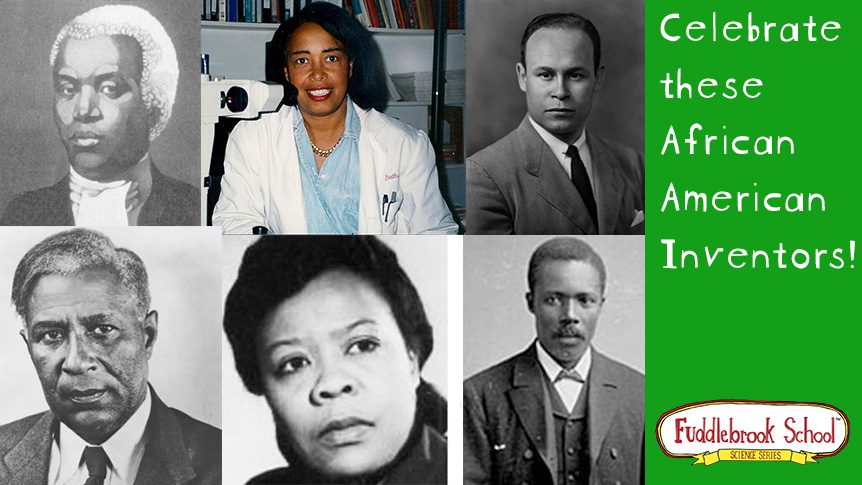 February is Black History month. Here are but a few  inventions/accomplishments by noted African American scientists and inventors. 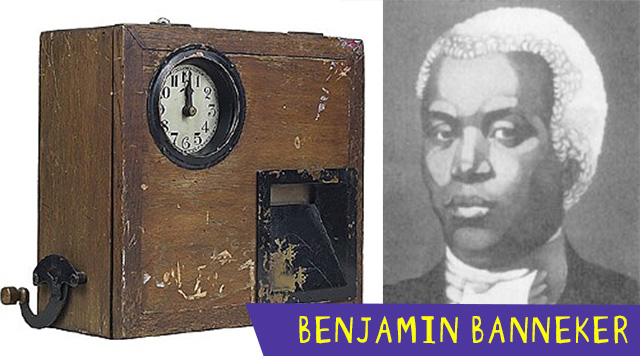 Like a lot of early inventors, Benjamin Banneker was primarily self-taught. The son of former slaves, most of his advanced knowledge came from reading and self-study. At 15 he took over the family tobacco farm and invented an irrigation system to control water flow to the crops from nearby springs. As a result of Banneker’s innovation, the farm flourished, even during times of drought.

But it was his clock invention that really put Benjamin Banneker in the spotlight. Sometime in the early 1750s, Benjamin borrowed a pocket watch from a wealthy acquaintance, took the watch apart and studied its components. After returning the watch, he created a fully functioning clock entirely out of carved wooden pieces. The clock was amazingly precise, and would keep on ticking for decades. 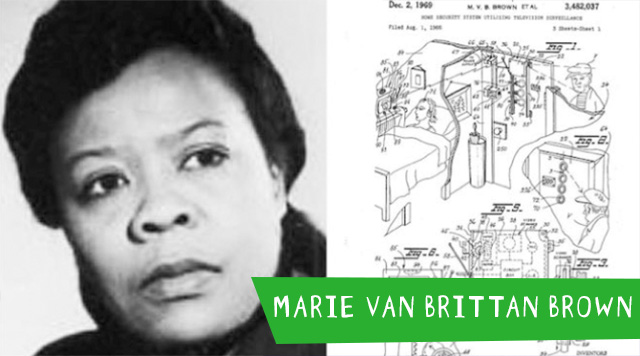 While home security systems today are more advanced than ever, back in 1966 the idea for a home surveillance device seemed almost unthinkable unless watching a cartoon like The Jetson’s. That was the year African-American inventor Marie Van Brittan Brown, and her partner Albert Brown, applied for an invention patent for a closed-circuit television security system – the forerunner to the modern home security system.

Brown’s system had a set of four peep holes and a camera that could slide up and down to look out each one. Anything the camera picked up would appear on a monitor. An additional feature of Brown’s invention was that a person also could unlock a door with a remote control. Far ahead of her time, Marie Van Brittan Brown created an invention that was the first in a long string of home-security innovations that continue to flood the market today. 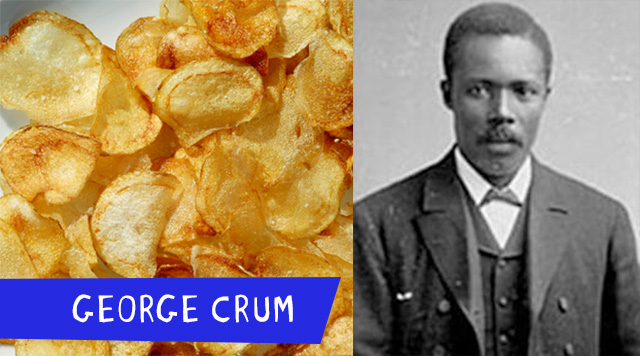 Every time a person crunches into a potato chip, he or she is enjoying one of the world’s most famous snacks – a treat that might not exist without the contribution of black inventor George Crum.

Crum was working as the chef in the summer of 1853 when he “accidentally” invented the chip. It began when a patron who ordered a plate of French-fried potatoes sent them back to Crum’s kitchen because he felt they were too thick and soft.

To teach the picky customer a lesson, Crum sliced a new batch of potatoes as thin as possible, and then fried them until they were hard and crunchy. Finally, to top them off, he added a generous heaping of salt. To Crum’s surprise, the dish ended up being a hit and a new snack was born! Years later, Crum opened his own restaurant that had a basket of potato chips on every table. 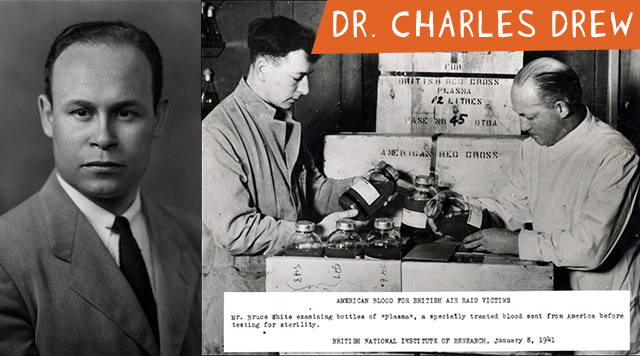 This physician, researcher, and surgeon revolutionized the understanding of blood plasma – leading to the invention of blood banks.

Born in 1904 in Washington, D.C., Charles Drew excelled from early on in both intellectual and athletic pursuits. After becoming a doctor and working as a college instructor, Drew went to Columbia University to do his Ph.D. on blood storage. He completed a thesis entitled “Banked Blood” that invented a method of separating and storing plasma, allowing it to be dehydrated for later use. It was the first time Columbia awarded a doctorate to an African-American.

At the onset of World War II, Drew was called to put his techniques into practice. He emerged as the leading authority on mass transfusion and processing methods, and went on to oversee the American Red Cross blood bank. When the Armed Forces ordered that only Caucasian blood be given to soldiers, Drew protested and resigned. 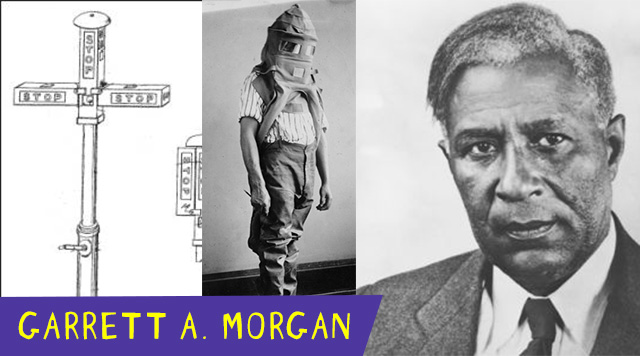 Many of the world’s most famous inventors are known for one major invention. But Garret Augustus Morgan created two – the gas mask and the traffic signal.

Born in the last quarter of the nineteenth century to former slaves, Morgan was only formally educated to a sixth-grade level. Fortunately, like many great inventors, he had an innate mechanical mind that enabled him to solve problems. He received a patent for the first gas mask invention in 1914, but it wasn’t until two years later that the idea took off. When a group of workers got stuck in a tunnel below Lake Erie after an explosion, Morgan and a team of men donned the masks to help get them out. After a successful rescue, requests for the masks began to pour in.

Similarly, Garrett Morgan’s other famous invention – the traffic signal – was also invented to help save lives. After witnessing an accident on a roadway, Morgan decided a device was needed to keep cars, buggies, and pedestrians from colliding. His traffic signal was designed to stand on a street corner and notify vehicles and walkers whether they should stop or go. After receiving a patent in 1923, the rights to the invention were eventually purchased by General Electric. 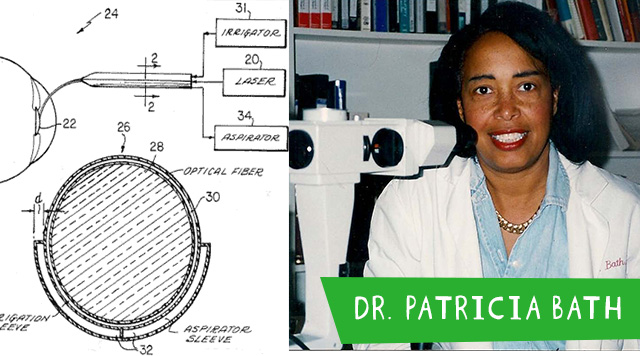 As a noted opthamologist, Dr. Patricia Bath has dedicated her life to the treatment and prevention of visual impairments. Her personal belief that everyone has the “Right to Sight” led to her invention in 1985 of a specialized tool and procedure for the removal of cataracts.

Her innovation, the Laserphaco Probe, combined an optical laser, irrigation system, and suction tubes. In use, the laser is inserted into a tiny incision on the eye; the laser then vaporizes the cataract and lens material, which is removed via the suction tubes. A replacement lens is then inserted on the eye.

With this invention, Dr. Bath helped restore the sight of people who had been blinded by cataracts for up to 30 years. Imagine how they must have felt when they opened their eyes to see Dr. Patricia Bath’s smiling face for the first time!